Find a patent number on a product that interests you. Look up the patent using an online reference tool.

​I am very interested in bicycle products, so I found patent number 4,957,227, which is titled Saddle mounted bicycle water bottle carrier. I used Google Patent (http://www.google.com/patents) 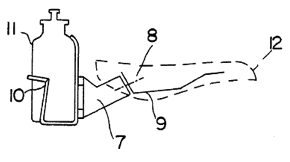 Draft a claim for the self-stick notepad invention marketed by 3M Corporation as the Post-it note.

The claims are a set of numbered phrases that precisely define the essential elements of the invention. The patent owner can prevent others from practicing the invention described by the claims only. The rest of the patent application is essentially background context for the claims.

Here is my claim for the self-stick Post-it note: A note taking device, comprising a stack of paper and an adhesive for joining the paper to each other or other objects.  Said adhesive allows the piece of paper to be stuck and unstuck multiple times, and does not leave a residue.

Draw a logic diagram of two claims for the patent in Exercise 1.

​Here are the claims for the patent in Exercise 1 (taken from a Google Patent search): 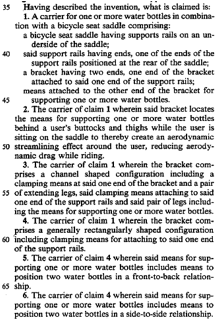 And here is the logic diagram of the first two claims: 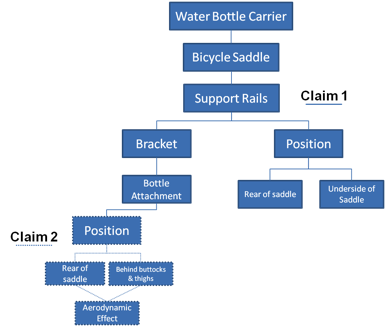 ​Concept #1: The coffee sleeve completely encloses the hot coffee cup. It can be thought of as a "cup in a cup", where the sleeve is a larger cup with foam stand-offs on the inside that isolate the heat from the outer cup, and act as a wedge to prevent slipping between the two cups. 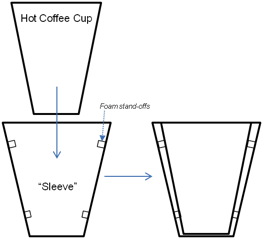 Concept #2: A plastic ring with a handle is used to hold the hot coffee cup. The ring would have a wedge shape to securely capture the cup. 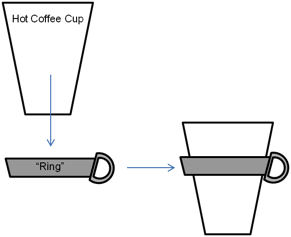 Controversy erupted in 1999 when the J.M. Smucker Company sued a Michigan bakery, Albie’s, for infringing on its patent by marketing a crustlesspeanut butter and jelly sandwich crimped on the edges (See U.S. patent 6,004,596.) Albie’s argued that the patent was issued in error because the invention was obvious. Look up the Smucker patent. Do you believe that the Smucker’s invention was nonobvious? Why or why not?

Patent law defines obvious inventions as those that would be clearly evident to those with "ordinary skill in the art" who faced the same problem as the inventor. In this case, the problem is that some people don't like the crust of the peanut butter sandwich. Children often don't like the crust because it is tougher to chew and has a different taste, and for this reason it is common for parents to remove the crust for their kids. Crimped edges would be useful in preventing the peanut butter and jelly from oozing out into the child's hands - though it's unlikely that many parents actually crimp the edges because a special tool or procedure is required. I would argue that parents have an "ordinary skill in the art" of sandwich making, and the solution of removing the crust (and crimping the edges) is obvious to them. In addition to being crustless and crimped, Smucker's patent had a claim relating to putting peanut butter on both pieces of bread with the jelly in the center to prevent it from leaking through the bread. Though this solution may be less obvious, their patent was rejected in 2003 due to prior art (e.g. Albie claimed that a similar sandwich has been a popular dish in northern Michigan since the nineteenth century).

An article on the topic can be found here.

Why might an inventor describe but not claim an invention in a patent?

Inventors might describe but not claim an invention because their disclosure becomes part of the prior art and therefore prevents others from patenting these alternative approaches to their actual patented claims.